Led by Dr João Florêncio (Art History and Visual Culture; Exeter Masculinities Research Unit) and funded by the Arts and Humanities Research Council through a 24-month Leadership Fellows grant (2019-2021), Masculinities and the Ethics of Porosity in “Post-AIDS” Gay Porn theorises gay “pig” masculinities and their visual mediation, which emerged in the last two decades in tandem with the introduction of antiretroviral therapies for the management and prevention of HIV infection. It does so through a close critical engagement with representations of “pig” masculinities in contemporary gay pornography, interviews with gay men who identify as “pigs” in London, Berlin, Los Angeles and San Francisco, and archival work at the Bishopsgate Institute (UK), the Schwules* Museum (DE), the ONE Archives (USA), and the Tom of Finland Foundation (USA).

“Pig” is a term used by some gay men to self-define themselves in terms of their own sexual practices, which they regard as transgressive, pushing the limits of the body and of its integrity through relentless condomless penetrations, stretching of the rectal sphincter, and exchanges of all kinds of bodily fluids (sperm, urine, saliva, etc). It is used in the names of hookup websites directed at gay men into fetish or “extreme” sex (e.g. NastyKinkPigs.com or AssPig.com) and often included, as a pig head or snout emoji, on usernames or profile text on gay hookup apps like Grindr, Scruff or Recon. It is also a term that, alongside “bareback,” has been appearing in increasing numbers of gay porn titles since the mid 1990s. What is interesting about gay “pig” masculinities are the ways in which they appear to be predicated on a transgression of the boundaries of the male body, a blurring of inside and outside, self and other, through the pursuit of relentless penetrations and exchanges of bodily fluids. Unlike hegemonic forms of Western masculinity, which have been shaped by a rejection of all things considered “feminine,” including penetrability, gay “pigs” appear to become more “manly” the more penetrated and open to foreign bodily fluids they are.

It is in that context that gay “pig” masculinities have emerged and become visible in gay online platforms and pornography. This research project will lead to the first monograph and documentary feature film critically discussing “pig” masculinities and their sexual ethics at length. Taking on a speculative research methodology (Wilkie, Savransky and Rosengarten, 2017) and drawing from porn studies, masculinities studies and the posthumanities, it theorises “pig” masculinities as porous threshold masculinities that simultaneously reiterate and trouble hegemonic traits of Western masculinity whilst pushing the limits of the body and opening themselves to new forms of sexual sociability and modes of communion.

In so doing, the project aims to contribute to existing critical histories of sexuality, subjectivities, and their visual representations by examining a contemporary form of gay male self-identification, one that is emerging in “post-AIDS” contexts through a complex interplay of desire, sexual performance, biochemical technologies, and 21st-century visual media. The full book is available for purchase through Routledge, with individual chapters also available via Taylor & Francis eBooks.

In his study of the abject use to which bodies are joyously put by gay male sex pigs, João Florêncio extends the future-oriented strand of queer theory in new directions and toward “unknown islands” of “unforeseen pleasures,” by suggesting that such horizons of queer masculine self-invention and solidarity might be located no place other than right there in the trough.

John Paul Ricco, author of The Logic of the Lure; and The Decision Between Us(both University of Chicago Press), and Professor of Queer Theory, Art History, and Comparative Literature at the University of Toronto.

Featuring interviews recorded in Los Angeles and Berlin in 2019/20, the experimental documentary short OINK! offers a portrait of gay men who—in different ways—relate to the gay “pig” sexual imaginary. It provides insight into their experiences of identity, masculinity, community, belonging, sexual pleasure and intimacy, as they are co-shaped and framed by 21st-century media. 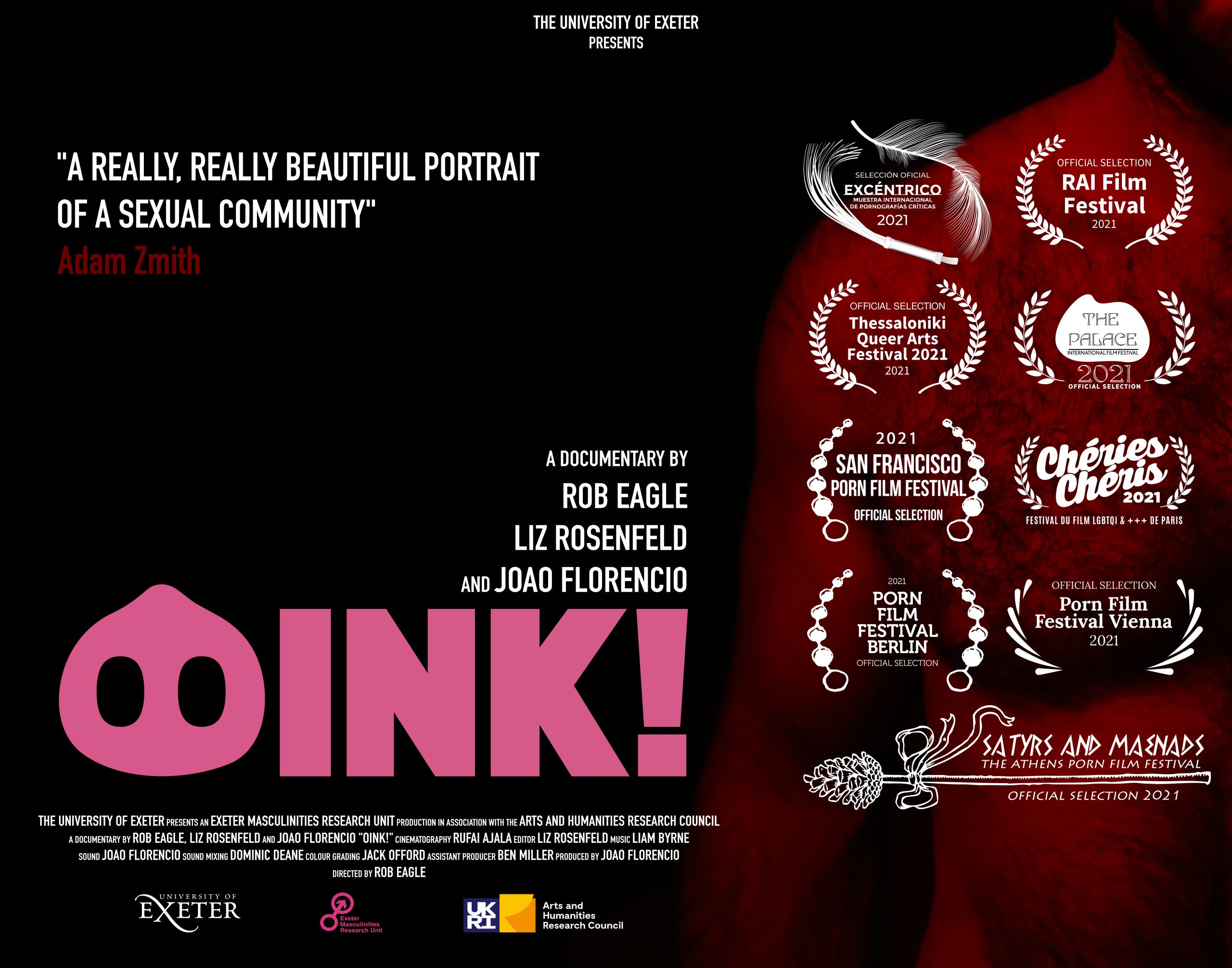 The film had its theatrical premiere in November 2020 in London at Fringe!, which was followed by a roundtable discussion on “Gay Sex and the Pandemic,” chaired by Dr João Florêncio and featuring Suzie Krueger (founder of sex clubs FIST and Hard On), John Thomas (adult performer), and Dr Elliot Evans (Lecturer in French Studies, Gender and Sexuality at the University of Birmingham).

OINK! has also been been produced as a 3-channel, 5.1 sound, immersive video installation available for screening in gallery settings. If you are a festival, cinema, gallery, or any other cultural or community organisation and would like to consider showing the film or the installation, please do contact us to request a screener and technical specs.